Almost  forgot this easy to implement feature.
Now it highlights the win.

By the way: you must have the media folder and the .jar next to each other for the .jar to run. If you want to customize the appearance, feel free to edit images. However, pay attention to where lines are at, and keep the sizes the same. Also, don't forget transparencies.
Posted by Nick No comments:

This update is coming around really slow because I haven't had much time to actually work on it. Lots of new code HAS been introduced, but not nearly enough for a functional game yet. Pretty soon I'll be going back to school so that could go either way. Maybe I'll find some extra help, but currently all graphics, logic, design, etc. are all being produced by me and it's a lot to do.

It has been awhile since 2.0b came out and I think it's time for an update.  As you recall 2.0b featured "people" in order to make it more realistic but the output was nearly unreadable because there was so much and the box was so small. However, that version prepared the way very well for the next version.  I will be rewriting a lot of it. This time all code will be self created, no GUI editor. That helps because netbeans was doing some funky stuff where I wasn't able to change the design without breaking the program.

Currently,  there are about 400 lines typed from starting from scratch but there is much more to be done and I am seeking reliable help. Multiple screens and the basic layout of objects is done. Each screen still needs work. There is a lot of artwork to make. With work at my paying job everyday, I anticipate being finished on my own in a month or two. We'll see. 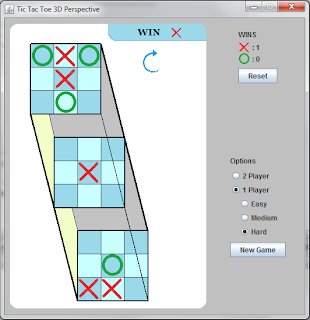 AI is complete with three settings to choose from.

Rewrote the win checking method completely (down to 6 lines instead of the previous 80) by making an array of the win possibilities. That also set it up to make the AI much easier to create. I used the heuristic scoring method.

This will most likely be the last release.
I might create app and applet forms but don't count on it. 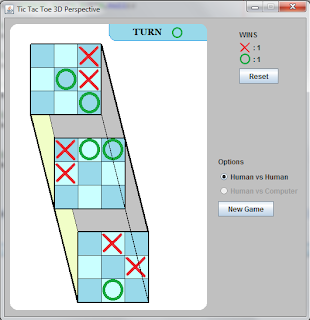 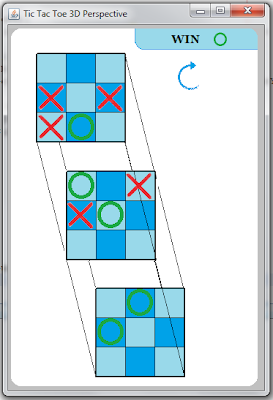 What started as an assignment nearly two years ago is finally taking shape today. The assignment was to create a 3D tic tac toe game in Java in the sense that it has multiple planes. Currently features a responsive gameplay for two people and an attractive interface thanks to Paint and GIMP. All graphics and code were created by myself. The code comes down to about 300 lines and makes use of loops and patterns in order to condense it so much. I deleted over 200 lines of code from previously.

Before recently, this game didn't function correctly because even though the win checking method was correct, I did not break out of the loops so the only win that would count was the very last one that it tested for. There were no attractive images and it was very slow. Everything was drawn with the standard AWT Graphics "draw" methods.

This game does NOT have an AI yet. I hope to either make this in Java 3D or make the perspective more obvious. Other features would include a win counter.
Currently the game is only a desktop application. I am considering converting it to an applet. Additionally I want to get started developing for the android platform so this may be an app someday.